"IT DESERVES TO BE A BEST-SELLER!"
THE PERFECT PAIR: THE ENCHANTED MIRROR

This is a remarkable and heart-warming true story of dedication, devotion and love, overriding normal barriers and allowing one young man to make extraordinary achievements with two dolphins, and to have close contact with many others.

There is a move afoot to classify whales and dolphins as non-human beings. That to kill them would be murder. This indicates the high intelligence, understanding and feelings that these animals have… they have a soul.

What David found through his love and understanding of dolphins was a natural means of communication. It was two way, and the dolphins wanted the contact, enabling them to learn quickly and enjoy the thrill of performing. To David this was just a natural way of doing things - as indeed it is to the animal kingdom - and David developed his telepathic communications and his psychic abilities through working so closely with these wonderful animals.

This is a moving story, beautifully told, carrying the reader effortlessly through the joys and heartbreaks of one young man’s selfless devotion as he struggles to bring out the best in his dolphins and achieve the impossible.

I read the book in one sitting and was often near to tears, but there was an overriding feeling of joy.

THE PERFECT PAIR: THE MIRROR CRACKS

From the very beginning of this second book in the dolphin trilogy, we are drawn into the mind of David on his intriguing and captivating quest for The Perfect Pair.

Not for one moment do you question the psychic connection - that two-way communication between David and his beloved dolphins. For this is indeed a love story. Why else would David tolerate the greed and cruelty of the men whose pursuit of money blinds them to the suffering of his dolphins?

The writing is superb and you share every moment of David’s rollercoaster journey. The joy of the dolphins’ achievements; the despair at Management’s lack of care for their health; the problems with the staff; and, above all, the unrelenting stress and pressure of being solely responsible for the training and care of his precious charges.

But David’s enthusiasm and determination drives everything forward and we too hold our breaths in anticipation of the making of The Perfect Pair.

I started to read this book and did not put it down until I’d finished. Not only is it a joy to read but it gives a fascinating and unique insight into the mind of the dolphin.

I congratulate David and Tracy on a wonderful read and I eagerly await the final book.

“It deserves to be a best seller.”

THE PERFECT PAIR: SHARDS FROM THE MIRROR

After the first few sentences, we are brilliantly drawn into the world of David and his beloved dolphins, feeling the stifling atmosphere and actually smelling the dolphinarium. It is hard to believe that it has taken almost six years to write The Perfect Pair Dolphin Trilogy, from The Enchanted Mirror, through The Mirror Cracks, to Shards from the Mirror. How wonderfully this story has been told, in such a compelling way that each book was read in almost one sitting.

The message is clear and powerful. Humanity has reached a stage where it is intolerant of the abuse and ill treatment of animals, especially in the world of entertainment. And David, who should have been praised and respected for his ability to communicate with his beloved dolphins, was treated with equal cruelty by the corporate bodies that slavishly used him and his charges as money-making objects.

David was an idealistic young man with dreams of greatness for his dolphins, but instead found himself in the lonely position of fighting not just for their well-being, but also for their very lives.
​
It is easy to understand why Shards from the Mirror took so long to write. You feel that this book is actually wrenched from David’s heart, and that must have been a painful process. But the result is a deeply moving and fascinating story that will stay with you for a long time. Hopefully it will lead to the end of the barbaric treatment of these magnificent animals, allowing them to be treated with the love and respect they deserve. 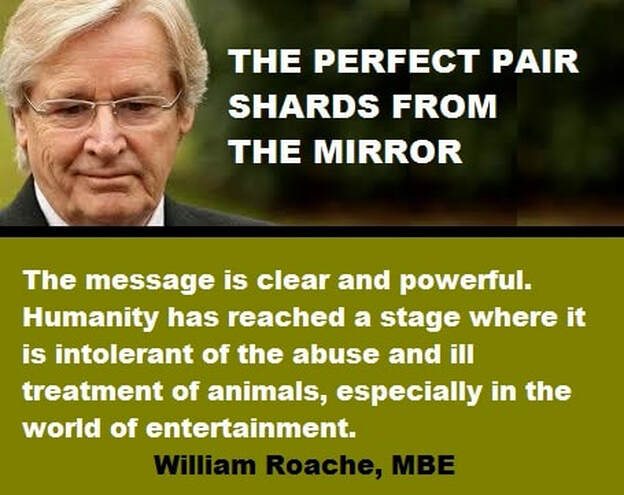